My Living Nightmare: patient fully paralysed but conscious during bout with rare disease 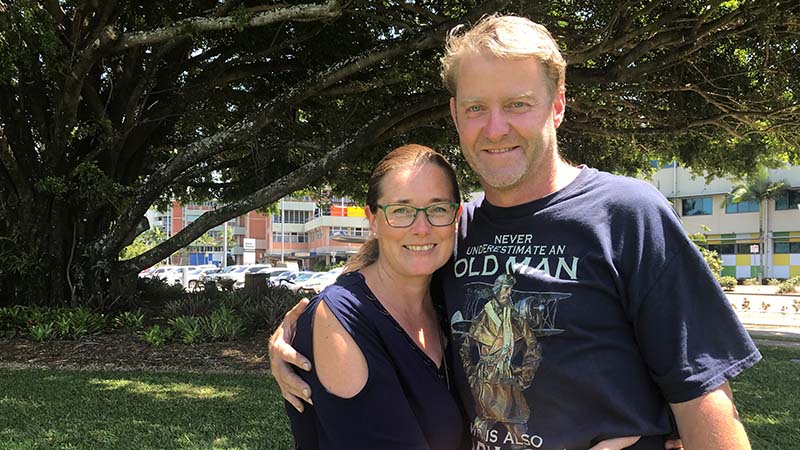 Tamara and her husband Christian McDonald outside Cairns Hospital after he has fully recovered.

A Tablelands resident diagnosed with a rare illness has given clinicians incredible insight into what a patient experiences when their body is fully paralysed, but their mind still conscious.

Christian McDonald, 49, was jet skiing with mates in January 2020, when he started losing strength in his upper body.

‘It got to the point where I couldn’t lift my arms anymore: they just kept going lower and lower,’ Mr McDonald said.

‘And then it just felt really horrible, and I knew something wasn’t right there.’

He was taken to Atherton Hospital’s Emergency Department, where his condition deteriorated, and he needed to be transferred to Cairns Hospital.

There, he was diagnosed with the rare autoimmune disease Guillain-Barre Syndrome (GBS).

The disorder causes a person’s nerves to be attacked by the body’s own immune defence system, with the most severe cases resulting in complete body paralysis.

About two in every 100,000 people are diagnosed with GBS each year in Australia.

There is no cure for GBS, however most people recover, even if it takes six months to two years or longer.

Mr McDonald’s condition worsened while he was in Cairns Hospital, and he needed to be admitted into the Intensive Care Unit (ICU), where he remained for 170 days.

For a month-long period during this time, he suffered complete paralysis, not being able to communicate with the outside world, while remaining fully conscious.

Mr McDonald, who has since made a full recovery, has described those 31 days as being a ‘living nightmare’ for him.

His account has been published in a recent edition of the British Medical Journal, giving clinicians invaluable insight into factors such as his ventilation, his physical therapy, and communication.

As his paralysis set in, he described moments of breathlessness, likening it to being ‘buried at the beach with only a straw protruding for breathing.’

‘I was…chasing those breaths all the time…and trying to count my way through it…just constantly trying to calm myself down,’ he said.

He said there were some physical therapy sessions were beneficial, while others provoked intense pain, via stretching of his muscles.

The key was communication, he said, an absolute life changer that only came about once he was eventually able to open his left eye.

Using an alphabet board, he was able to spell out words to clinicians, by moving his eye left and right.

‘You don’t realise how important communication is, until you’ve got nothing. It really is,’ he said.

Although he was unable to move, he said it was vital that visitors to his bed still spoke to him.

‘I had nursing staff come in and communicate to me every single step they were doing – that meant everything,’ he said.

‘That meant I could understand what they were doing to me and prepare myself a bit for it.’

It has been a slow road to recovery for Mr McDonald, who said the mental scars of his experience were taking the longest to heal.

‘Your mental fitness is everything in that situation, because that’s all you’ve got,’ he said.

‘You need to keep everything under control, so you don’t go insane, and focussing on what everyone is doing to help you.

‘I could tell when nursing shifts were happening, and got to memorise everything, because I was there that long.

‘They knew that I was awake, but it would have been so hard for staff to focus on me, because I just looked like I was asleep the whole time.

‘But for them to come in and realise that I was 100 per cent awake there – and treat me like so – that made such a huge difference to me.’

‘Most staff had some experience with GBS before, but no-one had seen a patient effectively ‘locked-in’ by the disease,’ he said.

‘We sought feedback from Christian after he was discharged from ICU.

‘His words are particularly powerful because most ICU patients who are fully dependent on care are either sedated or have a disease process which effects their cognitive function, or both.

‘Christian had neither and was able to provide a clear account of his experience.’

He said the ICU team had responded to Mr McDonald’s feedback by creating the option of a core team of nurses for long-term patients, considering different ventilation strategies for GBS patients, and instituting effective communication strategies early.

‘We thank Christian for his openness and motivation to improve the care of patients with GBS, and positive comments about our caring staff,’ he said.