Early arrival: How a series of events led to premature birth 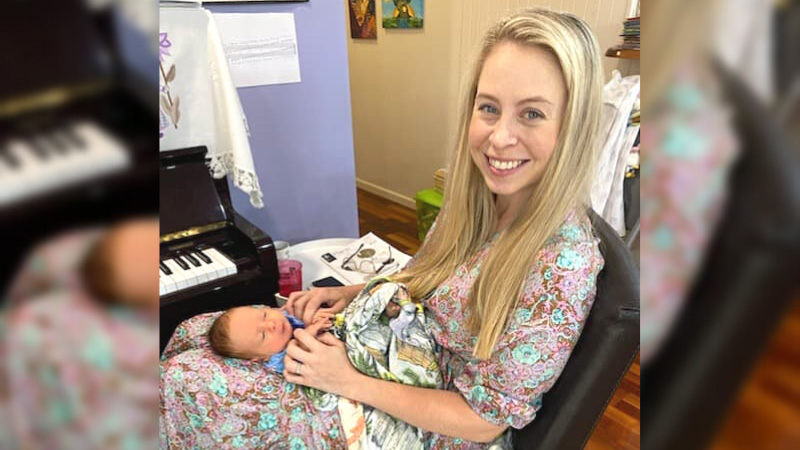 At 26 weeks pregnant with baby number three, Cairns Mum Katherine Fraser had no idea the death of her beloved dog, Jack, could be the catalyst for the chain of events that led to baby Thomas born prematurely.

It wasn’t an easy start to the pregnancy for Katherine, who was told at her 12-week scan that her baby may potentially have a chromosomal condition. The condition was eventually ruled out, however, a scan at 18 weeks showed there were prominent ventricles on the brain and the amniotic fluid surrounding the baby was low.

‘As an active mum of 2 boys, Michael (5) and William (3), bed rest wasn’t the easiest. There’s only so much parenting you can do from a bed,’ said Katherine.

‘Thankfully my husband Tim and I had a village to help us through these times.’

At 22 weeks, Katherine’s scan showed her amniotic fluid levels had improved and she felt she was finally in the clear.

Unfortunately, that was not the case. One afternoon, at 26.5 weeks pregnant, Katherine was playing with her youngest child in the yard when her neighbours delivered the news that their beloved dog Jack had been hit by a car. He was taken to the vet but didn’t survive.

‘I didn’t realise at the time, but I think the stress and heartbreak of losing Jack played a huge part in what happened next,’ Katherine said.

‘That night I decided we needed to do something positive, so I started setting up the nursery. However, as I stood up from the couch there was a panic of what many women can relate to - baby number three and it finally happened - I’d peed my pants!’ she light-heartedly recalled.

But the liquid continued to leak, so Katherine presented to the private hospital where a pad test confirmed she was leaking amniotic fluid. Her membranes had burst and she was in labour. She was told to prepare for a flight to Townsville University Hospital where they would take over her care.

As Katherine waited for husband Tim to return from Sydney, she called her mother, Peggy and asked her to pack her some clothes.

‘Poor Mum, I told her I wasn’t sure what I needed, but probably some pyjamas. And when she arrived at the hospital with my bag, I opened it to realise she had packed only pyjamas!

‘I was told to prepare to deliver within days. It was a very scary time as I was alone in Townsville while the village stayed behind to keep the rest of the family running.’

However, baby Thomas held on for 42 nights while Katherine waited anxiously at Ronald McDonald House in Townsville.

‘At 30 weeks I was finally cleared to return home to Cairns. I didn’t think we’d make it this far, so I was extremely grateful to be returning home, still pregnant.

‘Two days back home in Cairns I suffered some bleeding, but again he held on. Then at 32 weeks we had a reduction in foetal movements, so I presented at Cairns Hospital where they monitored me and then cleared us to return home.’

Katherine had made it to 35 weeks when she suffered another bleed, however, this one was significant and she was again admitted to Cairns Hospital.

‘I was seen by Dr Katrina Vogler who told me I’d be delivering our baby that day via a caesarean section. I called my husband to tell him to get to the hospital, our baby was going to be born today.

‘As contractions started, I was rushed into theatre where I was prepped by a fantastic team who kept me in the loop of everything that was happening and what to expect when delivering a premature baby via c-section.’

Thomas arrived weighing a tiny 2.36kg, but Katherine reassures us his set of lungs are anything but little!

‘He spent a week in a humidicrib and needed a nasal tube for feeding. He spent three weeks in the Special Care Nursery before we were able to bring him home to the rest of the family.

‘The care we received at Cairns Hospital was nothing short of amazing. The team in the Special Care Nursery do such a phenomenal job, and the communication we received helped us understand every step of the way.’

World Prematurity Day on November 17 draws attention to stories like Katherine’s and aims to increase awareness of preterm births and the challenges that come with them.