Rare, life-altering illnesses have not been enough to deter a Cairns couple from fulfilling a dream of reaching mainland Australia’s northernmost tip – with a bit of support from a team of allied health professionals. 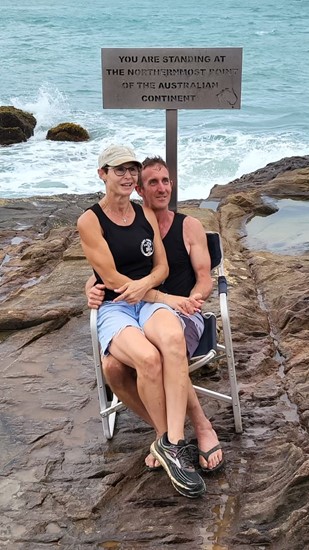 The disorder causes a person’s nerves to be attacked by the body’s own immune defence system, with the most severe cases resulting in complete body paralysis.

About two in every 100,000 people are diagnosed with GBS each year in Australia.

There is no cure for GBS, however most people recover, even if it takes six months to two years or longer.

Bec had a long 4-month stay in Cairns Hospital, including the Intensive Care Unit.

Her loving partner Matt was by her side the whole time.

When she was finally discharged from hospital, Bec received 9 weeks of rehabilitation from the Cairns Community Health Intensive Rehabilitation team to help her walk, optimise her function, and safely return to her work and daily activities.

Inspired by her recovery journey, Bec has since gone on to study and become a Pilates teacher.

A year later, Bec and Matt were unfortunately reunited with our Intensive Rehab team, when Matt himself was diagnosed with a rare degenerative neurological condition, Corticobasal Syndrome (CBS).

CBS is a rare progressive neurological disorder resulting from degeneration in a specific part of the brain.

The condition has been slowly robbing Matt of his movement, ability to swallow, his speech, and mental clarity.

In Australia, there are currently thought to be around 150 people with CBS, however it is a difficult condition for doctors to diagnose, so actual numbers may be higher. Community physiotherapist Sophie Morris said this time, the team was fully focussed on helping Bec and Matt achieve their dream of a few weeks camping to reach the tip of Cape York – which had been planned long before Matt’s diagnosis.

“Speech therapist Nick Hannah, occupational therapist Emma Lewis, and dietician Stephanie DeZilva and I all worked with Matt and Bec to optimise his mobility, speech and diet so that he could safely enjoy the trip,” Sophie said.

“Seeing our clients achieve goals that include enjoying the outdoors and nature is one of the best things about working in community rehab.

“With the whole team working together, we can often find ways to help our clients achieve beyond what they could ever imagine.”

Bec said she was lucky enough to have the team help her with her rehabilitation last year after illness.

“They are truly amazing,” she said.

“They are experts in their field and went above and beyond to help with my recovery, and are now doing the same for Matt a year later.

“I know I wouldn’t be where I am today without their help and encouragement.

“They really care about their patients.

“We are very lucky to have them on our side.”